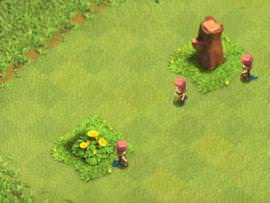 When the game respawns an obstacle, the respawn weight represents the chance of that particular item being the one that appears.

Rocks, once removed, do not reappear.

Tombstones spawn when attackers are killed.

The Gem Box is a mysterious box packed with gems! You can only have 1 gem box at any time in a village. Clearing the Gem Box costs 1,000 Elixir, takes 30 seconds to clear and will give you 25 gems. The gem box is rare but in the recent update they made them more common.