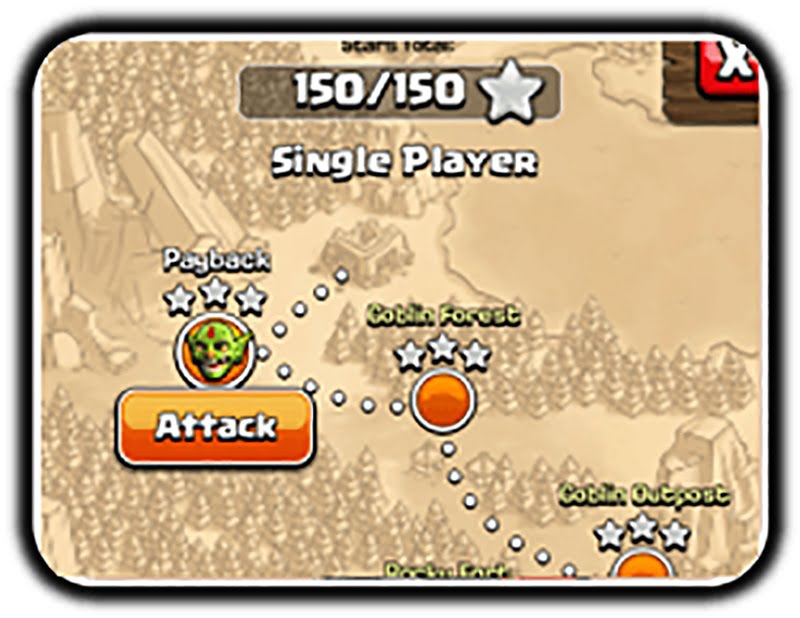 Single Player Campaigns are battles against NPC Goblins and their preset villages. There are currently 50 Single Player levels, and each level has 3 stars that can be achieved for a maximum possible 150 stars from all levels. Achieving all 150 stars satisfies the “Get those Goblins!” achievement worth a total of 35 Gems. Each level also has varying Gold and Elixir rewards that can be raided from storages and Town Halls. The basic mechanics in the Single Player Campaign are the same as in multiplayer, with the following exceptions:

Most people attack while they have a shield and nothing else to upgrade to give them something to do.
Doing the campaign is well worth it, as the last raid is worth 800,000 Elixir and 800,000 Gold. Furthermore you get Gems for three-starring every map.

A number of the levels have no Air Defenses, Archer Towers or Wizard Towers. That means you can easily complete them with a single Balloon (or Minion). Be aware that other missions can still be won with 1 Balloon as well; you just have to destroy all the Wizard Towers, Air Defenses and Archer Towers with other troops/spells first.

Below is a list of all Single Player missions and their rewards, along with brief strategies for completing them: