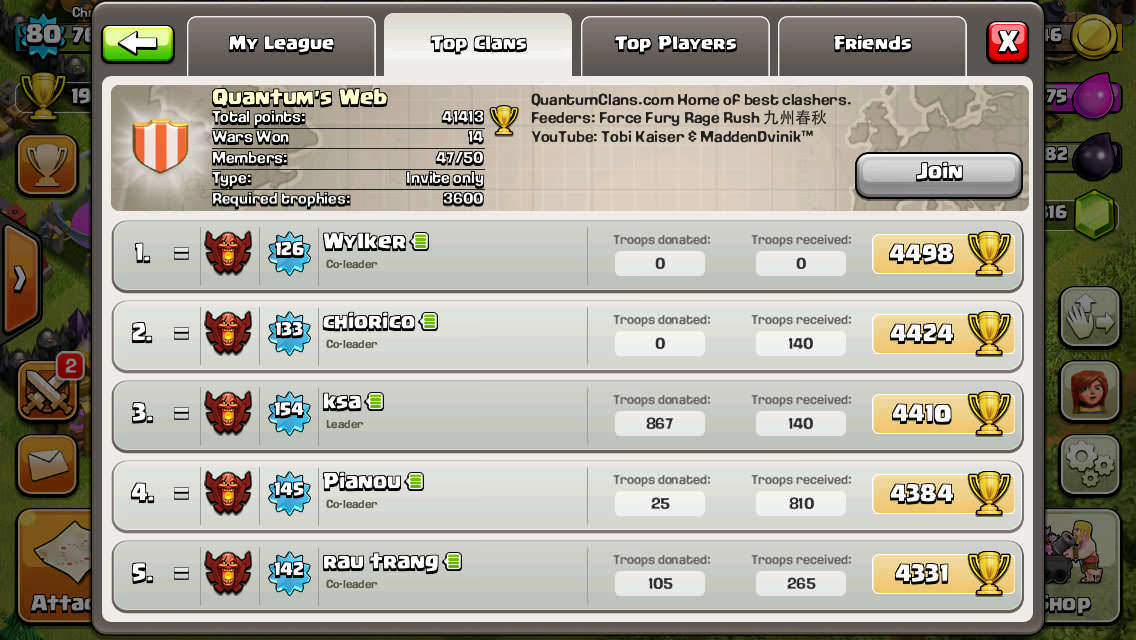 Become a Clash of Clans Master without Gemming

You dont have to spend loads of money to secure a spot for your village in the Clash of Clans Master League. While the top ranked players are all Gemmers who spend A LOT of money on the game (one player has put over $7,000 into his village – in just over a month LINK ), you don’t need to be a baller to be a Master. A trophy score of 2,600 would get your village in this exclusive League, earn you 1,000 gems, and a win bonus of 75,000 elixir, 75,000 gold and 400 dark elixir per battle.

Here is how to do it. Focus on three things: 1. Clan Selection 2. Base Design 3. Army Composition.

Clan selection is the most important aspect and should be your main focus. The support of a successful donating clan is crucial. They will donate the troops that you need when you need them. When you go into battle, you need additional troops to supplement your own armies. These extra troops will also help protect your base when you’re logged off. The best way to do this is to join a clan with a minimum donation requirement of at least 500 per 2 weeks. At the same time, it’s time to trim the fat. If you have clan members who are receiving hundreds of troops but being stingy with their donations, kick them out so that they can join a less ambitious clan.

Also crucial to making it to the big leagues: focus on your base design. Good bases generally use similar blueprints – these or symmetrical or asymmetrical.

Symmetrical bases mirror themselves from all perspectives. They have the same strengths and weaknesses regardless of which side they are attacked from. This type of base is your best option against an experienced attacker.

Asymmetrical bases usually have a unique feature, like an open entrance that appears safe but is filled with traps. These setups often work when your ranking is below 2400. More experienced competition won’t fall as easily for such bait. They will easily see the weaknesses in a design, making it that much easier for them to destroy you.

Pay close attention to wall selection. A pink level 6 wall can be destroyed by a level 6 Wall Breaker in one hit. Spend about a month of gold farming to upgrade all your walls to level 7. This way an attacking 12-Wall Breaker army is reduced to a 6-Wall Breaker army, since they will need two Wall Breakers to break a wall.

A level 10 Town Hall will increase your chances of reaching 2600. Along with an extra Archer Tower, canon and X-bow, you get 2 Inferno Towers. You can set these up to target single or multiple (up to 5) targets. It’s best to station these in the middle of your base and keep them on a single target. You will probably be able to handle large groups of level 1 units, but at this level it’s the Golems and level 10+ Archer Queens and Barbarian Kings that you need to worry about.

In regards to Base Design, Air Defense is also important. Upgrade your Air Defense to at least level 6, preferably 7 or 8. Players aiming for 2600 will spend time building up their armies. You need to be prepared for a 54-Balloon army with King and Queen rage and heel spells. To counter this you can also set your X-Bows for anti-air. One attack you’ll see a lot is the mass level 5 Hog Rider attack. This army is expensive to build, and will crush most unprepared bases. Walls don’t stop these units, so you have to rely on strategically placed anti-hog bombs and traps. Figure out where you frequently get attacked, make gaps inside your base at these points and position Giant Bombs to target units that meet there once they breach your walls.

Put your Town Hall in the center of your base. Leaving your Town Hall outside your walls while trying to farm trophies will be pointless. Place your Clan Castle, Archer Queen and Barbarian King around your Town Hall. You want to maximize the amount of time and effort opponents need to lure your units outside your base. Your goal is to engage your troops with the enemy inside your defensive lines, combining their strength with that of your stationary defenses.

A carefully designed army is essential to win in Clash of Clans. Always consider army cost. If it costs too much, you will not make your money back from attacks – you will run out of funds on a sustained trophy climb. Think value. Your best options are the Archer Queen and Barbarian King, which are free and very strong when upgraded. You will probably want these between level 5 and 10 when first attempting the Masters League trophy climb. Make sure that these troops are available every time you attack. If this means you have to wait more than an hour between attacks, wait.

A great way to use the rage spell is by breaking into an opponent’s base, bombarding it with troops, and covering them with the spell. Rage spells are also good when your Queen needs a little extra juice to three-star a base late in the battle.

Always consider which direction you should attack from. The best strategy is to attack from a corner – this way the troops can only disperse in a 90 degree angle, making it much easier to control them.

A useful type of army is a Hog Rider swarm. However, I wouldn’t use this unless they are at least level 4, preferably 5. Again, heal spells are great for this type of army. Get as many Hog Riders and heal spells as you can before you attack. Once the riders have cleared the walls start dropping the heal spells. This can cause serious damage, even to really strong bases. Keep an eye out for Giant Bombs placed just inside your opponents base; these, with splash damage, can be devastating. After taking out the defensive buildings your hog riders will take care of the rest.

One last strategy you need to be familiar with is the air attack. Many people at around 2400-2600 focus on their armies and forget about their Air Defenses. They won’t be prepared when you bomb them with mass level 6 balloons. Just remember to avoid X-Bows pointed in the air and advanced Air Defense.

These are the kinds of tactics that will get you into the Master League, without spending a mortgage (or seven) on the game. Good luck Clashers