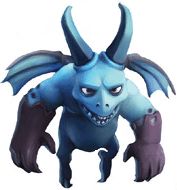 If your attacker plans on deploying a large amount of Minions, they will typically try to trigger your Air Bombs first with single Minions deployed at several points around your base (see Offensive Strategy). To counter this, make sure the trigger radius of each Air Bomb is at least behind the first row of defended buildings; this will help ensure that the single Minions will be destroyed by other defenses before they can trigger the Air Bombs.

This article is licensed under the Creative Commons Attribution-ShareAlike License. It uses material from the Minion article.